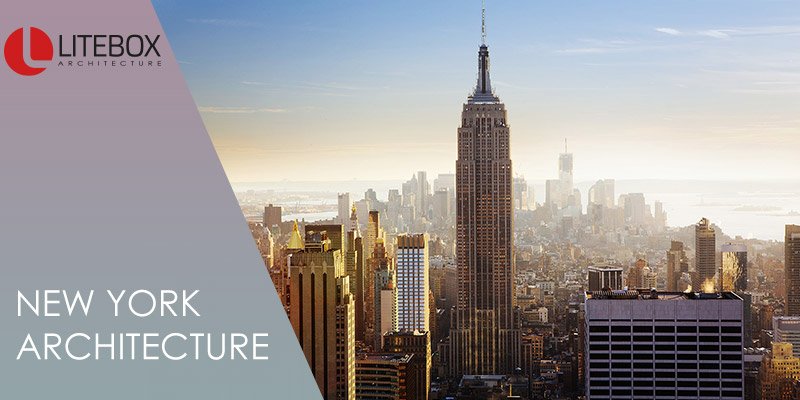 Paul recently took a holiday in New York, check out his architectural highlights in this amazing city.

The building was designed in the Art Deco style by the architect William F. Lamb, who drew up plans for the building in just two weeks! The building rose incredibly fast as well – 410 days after construction began, the building was officially opened on May 1, 1931. Empire State Building rises 102 stories, there may be taller buildings, or more innovative ones, but this Art Deco beauty is perhaps New York City’s most beloved building. However, it was the tallest skyscraper in the world for 41 years.

Every evening, the building’s top 30 stories are illuminated with colours. These might reflect the season, celebrate a holiday, or commemorate local sporting teams or worthy causes. 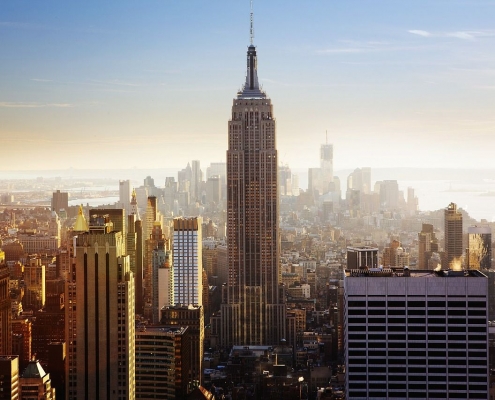 The World Trade Centre Transportation Hub in Lower Manhattan was officially opened to the public on 4 March 2016, replacing the PATH train station that was destroyed in the September 11 attacks.

The structure is formed by softly-curving, white, steel ribs that rise from below the ground to form an elliptical dome over a vast concourse. The transparency of the structure allows light to flood through onto the grey and white marble floors below, and a skylight that runs the length of the Oculus’ spine will open each September 11 to honour the memory of the victims. 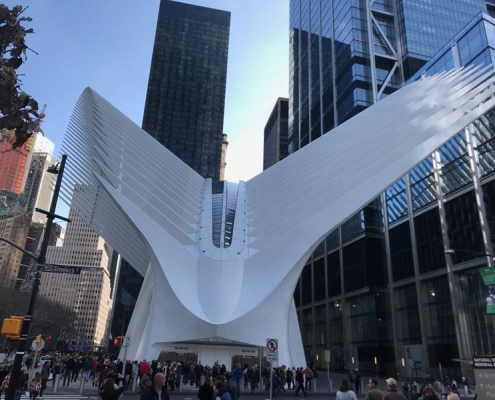 Brooklyn Bridge is one of the most well-known symbols of New York City. The Brooklyn Bridge was the world’s first steel-wire suspension bridge. More than mile-long span is notable for its suspension construction and its beautiful stone anchorages, with their elegant Gothic arches. At that time, the bridge was the only land passage between Brooklyn and Manhattan. Today, tens of thousands of people, vehicles, and bikes travel over the Brooklyn Bridge every single day.

The biggest question everyone asks, is: ‘Where do I start to walk the Brooklyn Bridge?’ You can walk from the Manhattan side or from the Brooklyn side and we recommend both. They are very different experiences, so we suggest walking across and then back. The walk is 1.3 miles each way, so that distance should take around 20-25 minutes.

Designed by architect Daniel Burn and built in 1902, the building is a historical significance to New York City. Today, it is purely an office building. At the time it was built, the Flatiron Building was one of the tallest structures in New York City. Although it’s lost that distinction and only its triangular shape helps it stay one of the city’s most recognizable buildings. It was originally named after George A. Fuller, founder of the Fuller Company. But New Yorkers gave this building a name of their own, the Flatiron Building, because of its similarity to the flat iron.

Getting inside the Flatiron building is not that easy. You can enter the lobby but cannot go upstairs into the offices. The views from the Flatiron onto Madison Square Park and Broadway are quite nice. 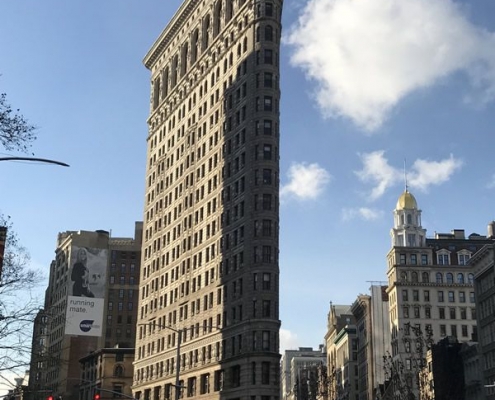 Which is your favourite building in New York?

How to convert your garage

This site uses cookies. By continuing to browse the site, you are agreeing to our use of cookies.

We may request cookies to be set on your device. We use cookies to let us know when you visit our websites, how you interact with us, to enrich your user experience, and to customize your relationship with our website.

Click on the different category headings to find out more. You can also change some of your preferences. Note that blocking some types of cookies may impact your experience on our websites and the services we are able to offer.

These cookies are strictly necessary to provide you with services available through our website and to use some of its features.

Because these cookies are strictly necessary to deliver the website, refuseing them will have impact how our site functions. You always can block or delete cookies by changing your browser settings and force blocking all cookies on this website. But this will always prompt you to accept/refuse cookies when revisiting our site.

We fully respect if you want to refuse cookies but to avoid asking you again and again kindly allow us to store a cookie for that. You are free to opt out any time or opt in for other cookies to get a better experience. If you refuse cookies we will remove all set cookies in our domain.

We provide you with a list of stored cookies on your computer in our domain so you can check what we stored. Due to security reasons we are not able to show or modify cookies from other domains. You can check these in your browser security settings.

These cookies collect information that is used either in aggregate form to help us understand how our website is being used or how effective our marketing campaigns are, or to help us customize our website and application for you in order to enhance your experience.

If you do not want that we track your visist to our site you can disable tracking in your browser here:

We also use different external services like Google Webfonts, Google Maps, and external Video providers. Since these providers may collect personal data like your IP address we allow you to block them here. Please be aware that this might heavily reduce the functionality and appearance of our site. Changes will take effect once you reload the page.